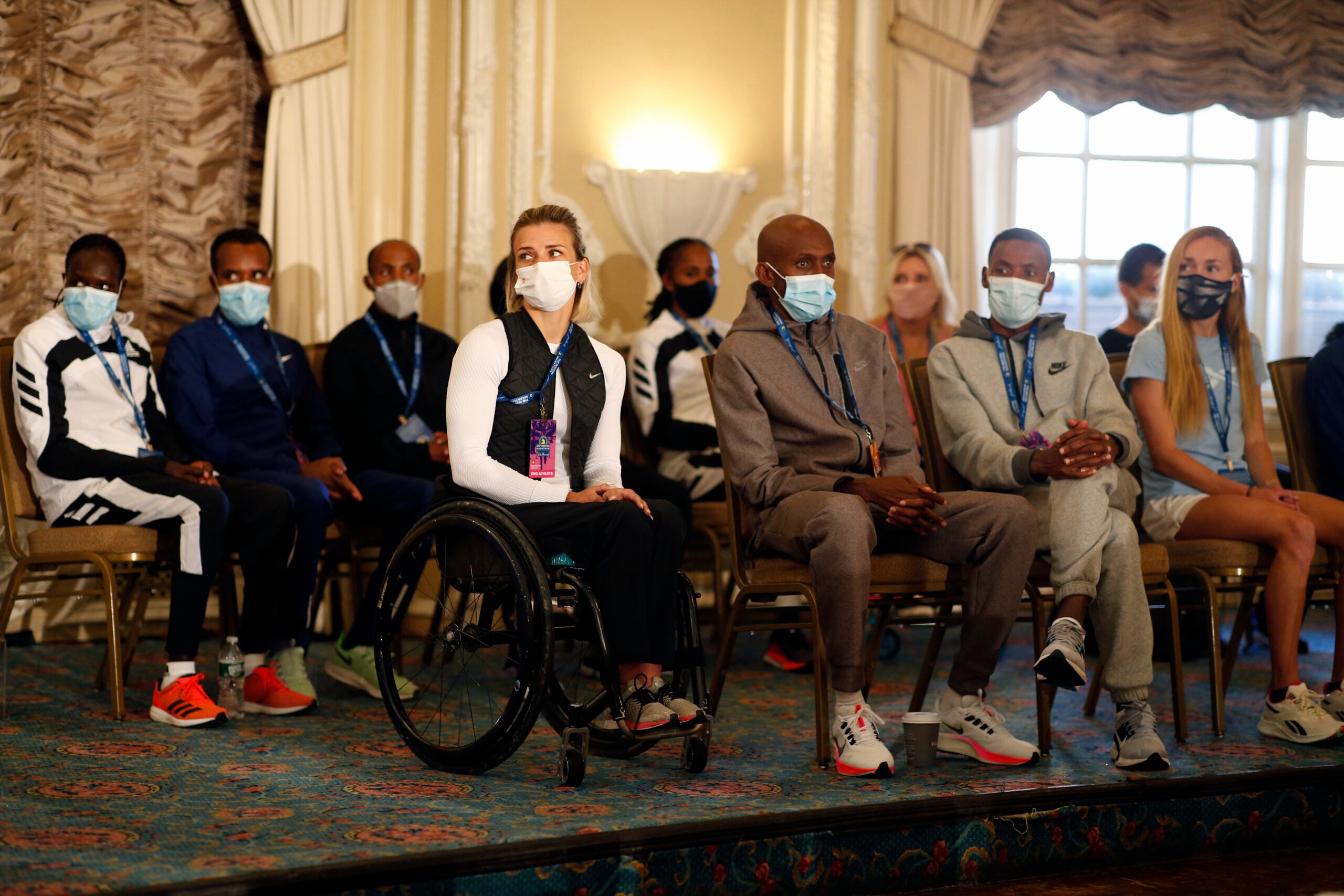 As Boston Athletic Association CEO Tom Grilk addressed the media at Friday’s press conference inside the ornate ballroom at the Fairmont Copley Plaza hotel, he was flanked by the view impressive field of the elite field of the 2021 Boston Marathon.

“This year,” said Grilk proudly, “we have one of the strongest professional fields we’ve ever had with 140 athletes and 13 champions.”

It is a feat for the organizers of the BAA to have assembled such a talented group, given that the competition between the six World Marathon Majors for elite athletes has probably never been greater.

The circumstances of the 2021 calendar, and what it meant for elite athletes.

Due to the ongoing COVID-19 pandemic, the schedule has changed not only for the Boston Marathon – which is slated for its first October edition – but also for several other majors.

Starting with the Berlin Marathon (held on September 26) and ending with the New York City Marathon on November 7, the six World Majors will take place over six weeks. This compares to the usual annual calendar:

The effect of such an unusually crowded time is that – with the possible exception of Des Linden, who said she would try to run in both Boston and New York – athletes didn’t have to choose. only one major marathon to run in 2021. This differs from their usual schedule.

“Ideally, you do two a year with six month intervals for accumulation,” explained Jordan Hasay. The 30-year-old has been third in Boston twice. The first time she did so, in 2017, Hasay then finished third in Chicago six months after Boston, a perfect example of spreading multiple fitness peaks over the course of a year.

But with all the majors taking place in just 42 days, regular planning has been impossible. Instead, the athletes simply chose a single 2021 major.

What the athletes said about why they chose Boston.

One of the unique aspects of the Boston Marathon has always been the drop in elevation. It’s such a pronounced attribute of running that it’s actually a reason a world record in Boston wouldn’t officially count.

But the unusual nature of the Boston course is also a distinct feature that has helped attract elite athletes due to the type of racing it creates. Instead of just setting a metronomic pace on a flat course, athletes racing through Newton’s Hills need to be more tactically savvy as they compete more directly with each other.

“The tactical part is one aspect, but it’s the hills,” New Zealander Jake Robertson said. “I have been training on this ground all week in Kenya and the Kenyans have told me I am very strong on the hills.

Boston organizers also let elite athletes run on their own and at their own pace.

“One of the main reasons I chose Boston is that there are no pacemakers,” noted Parker Stinson, who finished 11th in the 2019 Chicago Marathon and will make his Boston debut. “It allows for a bit more of a real competitive race. A tactical race, instead of just aiming for the clock.

Hasay also noted that “the hills are really fine for me”, also explaining that she likes the specific start time given to the different areas of the competitors.

“I’ve really enjoyed it in the past because it’s more of a race than a time trial,” said Hasay.

Naturally, as 2021 is the 125th edition of the Boston Marathon, every athlete also claimed the prestige of the event as the reason they wanted to come.

“Boston is a really big race,” said Ethiopian Bruktayit Eshetu. “I came in 2019, but it was not a good race so I wanted to try again. “

For a two-time Boston winner like Lelisa Desisa, it was all about going where he felt comfortable.

“You know, I’ve done a lot of races here and I have my best results here,” said the 31-year-old Ethiopian. “I like it here, so I chose it here.”

And for at least one athlete, the timing of a Boston Marathon in the fall is actually ideal. Minnesota-based Dakotah Lindwurm said the once-in-a-lifetime opportunity was too good to pass up.

“This is a really unique opportunity – and probably the only one – that I will have to train all summer for Boston,” said Lindwurm. “And I really wanted to give Boston my all, and that’s about the only way to do it.”

What the 2021 schedule could mean for the Boston outcome.

One aspect of the unprecedented list of fall marathons – and cancellations linked to the 2020 pandemic – is that many athletes have not competed in a major tournament for almost two years.

As Hasay pointed out, this could have fascinating implications for the race itself.

“Usually you can say, ‘Oh, they did that in their spring marathon,’ and then you kind of have an expectation,” Hasay added. “That’s why it’s actually interesting with the women’s field, because a lot of us haven’t raced for a few years. You just don’t know where someone is.

Get the latest Boston sports news

Receive updates on your favorite Boston teams, straight from our newsroom to your inbox.