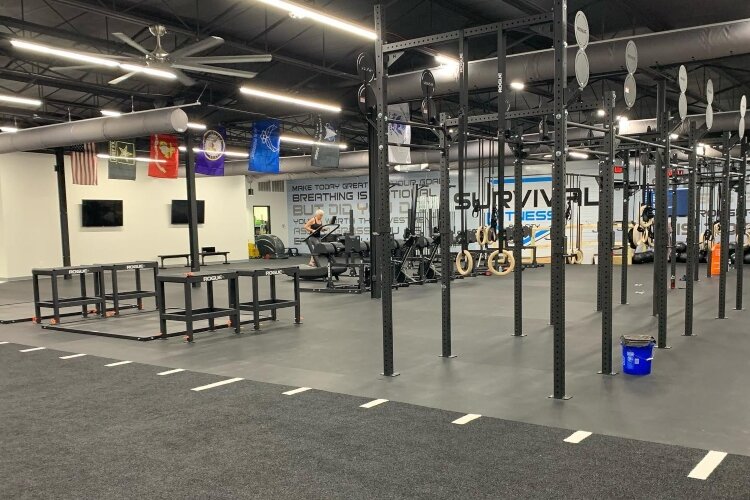 Survival Fitness is more than a gym. It’s a fitness community.

The new location of Survival Fitness is unmistakable. The fitness center recently opened in what was once the American Red Cross building on Washington Avenue across from the Bay Area Family Y, after nearly a decade in the Dunlap Building.

With its bold sign and the exterior of the building painted in black and white, the fitness center is an eye-catcher.

Jason McCrandall says the location is perfect for the growing business, which is “completely different from the Y”.

McCrandall says inside the old building at 228 Washington Ave., the CrossFit gym was starting to experience growing pains. Classes were at or near capacity, and instructors wanted to expand the offerings.

“We had a few of our members who owned the building, and they finally convinced me. “

McCrandall says going from a 1,600-square-foot building to nearly 9,000-square-foot space was a leap, but he’s already seeing the benefits.

Different from a gym, McCrandall says Survival Fitness is more like a community, where people not only receive personal training, but also instruction. “We write programming for everyone, so we build a fitness trail for them, rather than doing it themselves. “

McCrandall says the goal of the CrossFit program is to get people moving “so that we can do whatever activity we want faster and longer, be it jogging, running, biking, wrestling, soccer. or gymnastics. Our goal is to develop better overall physical condition.

Survival Fitness is also a small community, and McCrandall plans to keep it that way. Even though it’s a larger facility, he says he won’t try to accommodate more than 150 people.

Survival Fitness is located in a building in downtown Bay City that once housed the American Red Cross.“Once you have exceeded that number of members, you no longer have that sense of personal community. “

“We are rightfully a community of people who work together to encourage, strengthen and empower each other.”

“We only offered the 5:45 am class,” he says, but we’ve since added classes at 8:00 am and noon. “I was surprised to find how many people were just waiting for an 8am class.”

Some people need to develop their nutritional skills to improve their physical condition. McCrandall says the centers offer this as well.

“We’re going to teach you how to do it right. Maybe you want to work on nutrition – we’ll have one of our nutrition coaches sit down with you and work on a plan. Everything is on a personal training type level.

What you need to know about treating vampire skin

82-year-old Florida known for her fitness