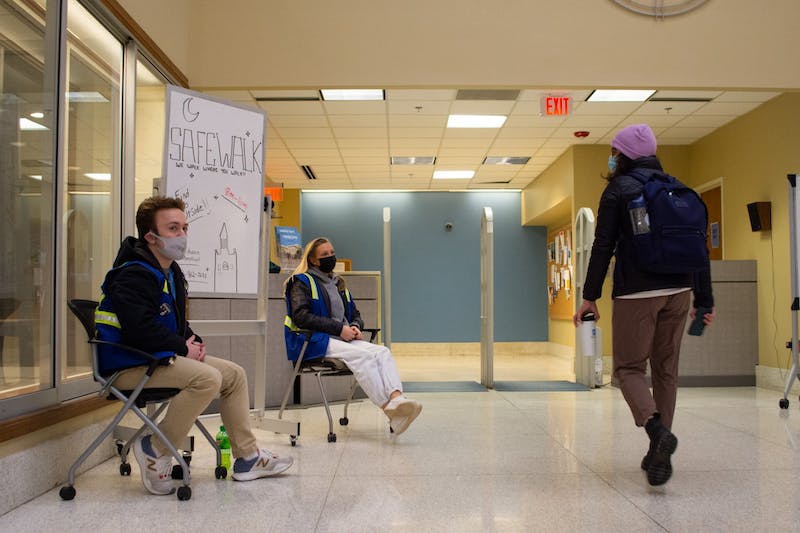 SafeWalk brings safety to UNC students on campus after hours

Whether they’re hanging out with friends or studying in the library, many students take advantage of the midnight oil burning on campus, keeping them in the dark. For Tar Heels trying to get home safely at night, SafeWalk offers a free walk with UNC students trained by the North Carolina Department of Public Safety.

“We’re kind of like a late-night buddy system that gives students who have no other means of transportation a safe way to get home,” said Nick Chappell, director of SafeWalk.

The program, which operates Sunday through Thursday from 8 p.m. to 12 a.m., extends to locations both on and off campus, including the Lark and Union apartment complexes.

There are three ways for members of the UNC community to request SafeWalk’s services. Individuals can call 919-962-SAFE (7233), book a walk through the organization’s Calendly, or contact a SafeWalk team outside the Davis Library.

Chappell said SafeWalk also has a student dispatcher that takes phone calls and emails from students requesting a walk. During their shifts, employees have access to equipment such as bicycles and umbrellas if needed.

“Over the past two years, we’ve seen record numbers in terms of student use of the program,” he said. “I think we’ve averaged about eight to nine walks a night pretty consistently, and that’s just with a pair of walkers. .”

Junior Rupin Sharma is in his second semester working with SafeWalk. He said the paid position has benefits both for night owls like himself who like to exercise and for students who are on campus at night.

Junior Sophia Raspanti, who was also a walker with SafeWalk this semester, said she also appreciates the added safety the program brings to campus, as well as the program’s healthy work environment.

“I really like the positivity it brings to the campus environment, and just the idea of ​​students caring about other students,” she said.

At the height of the pandemic, Chappell said COVID-19 safety protocols changed the availability of rides for students. Instead of walking with students in person, SafeWalk provided call-in services, speaking to students who needed a ride home over the phone.

The program also had to reduce its hours during the pandemic, but this past semester SafeWalk returned to a schedule similar to its pre-pandemic hours. Every SafeWalk employee is required to wear a mask while working their shift, whether in the office or on campus.

“What I’m most proud of is bringing this program back to what it was,” Chappell said. “A lot of times people will think it’s a burden for us to walk them, even though we’re paid to do it, and we love doing it.”

To get the day’s news and headlines delivered to your inbox every morning, sign up for our email newsletters.