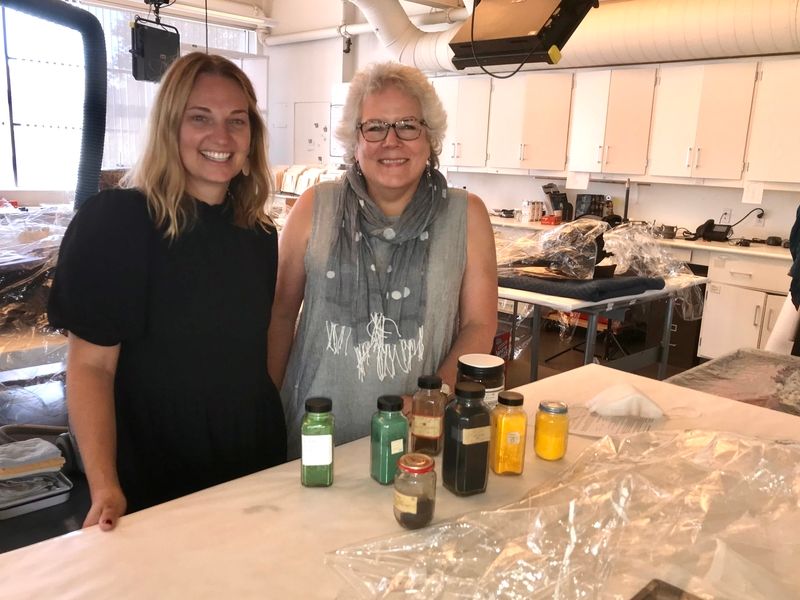 Harness Cycle, the rotating fitness center in Ohio City and downtown Cleveland, is closed except for online classes during the pandemic. But that hasn’t stopped owner Anne Hartnett from developing plans for a permanent home that could also serve as a springboard for several businesses.

Hartnett has entered into an agreement to purchase the Vitrolite Building, 2915 Detroit Ave., from the Intermuseum Conservation Association (ICA), a non-profit organization providing museum-quality art and historical restoration services that owns the building for 20 years. The ICA is reducing its physical footprint and narrowing its reach with a move to rented space at the Pivot Center, the arts and social service center at 2937 West 25th St.

â€œHarness Cycle is really a neighborhood business,â€ Hartnett said during an interview and tour of Vitrolite, which is located next to the original spinning center house in Hingetown.

â€œWhat’s unique is that we want to stay in the community where we have connections with Inca Tea and other stores in Hingetown,â€ she said. “We will have the entrance to Harness Cycle on Church Avenue and an entrance and other businesses in Detroit.”

Due to the changing office market, Harness Cycle’s downtown operation, which now serves as a stationary bicycle rental center, will be permanently closed at the end of the year.

The two-story Vitrolite building, notable for its white architectural glass and detailed glass patterns on the exterior, fills the bill on many levels.

The showroom built in 1900 for the Chicago-based pigment glass maker of the same name also served as the Cleveland-area warehouse for its products. Its floors were built to withstand heavy use. This has been perfect for large works of art at the present time and in the future will be partly for at least 35 stationary bikes, with room to upgrade to 50 bikes and cyclists. However, the 18,000 square foot structure has two floors that will accommodate lockers and changing rooms, with space remaining.

Vitrolite will be renamed “Harness Collective”, reflecting the plans of Hartnett and Andrea Loczi, CEO of Harness Cycle, to fill it with multiple uses. Plans call for relaunching Groundswell, a former Hartnett business, with yoga classes on the second floor in what is now the CIA’s office for its curators which has arched windows facing Lake Erie. Weather permitting, the top floor of the building will serve as a venue for outdoor yoga classes.

Groundswell could also be expanded, Hartnett said, with outdoor activities such as paddle boarding on the lake.

The more ambitious concept is to use the back half of the second floor for what Hartnett and Loczi call “The Founders Club,” a retail incubator for start-ups, especially those in the food, beverage and retail sectors. beverages and retail.

The existing Harness Cycle location on the east side of Vitrolite will be sublet for them and other pop-up retail businesses. Another area of â€‹â€‹Vitrolite will be devoted to children’s arts-oriented activities, while their parents train. A cafÃ© will be installed at the front, which will be able to merge an established operator with the startups.

The cafe is planned for the front of the building – an incredible space as sections of its walls are covered with samples of Vitrolite in various colors and patterns. The cafe will also serve the public to give people outside of Harness Cycle customers a chance to enjoy the storefront, Hartnett said. The ICA had started restoring the storefront space as a potential education hub when the pandemic put an end to that plan.

Many details of the retail incubator and childcare operations remain to be determined, which is why Loczi has joined the staff as CEO to manage operations as Hartnett works on real estate and d ‘other questions.

Julie A. Reilly, executive director of the ICA, said she and the organization’s board of directors had changed their plans due to the impact of the pandemic on her budget and those of some of her clients : non-profit organizations such as art and history museums, in addition to collectors.

The ICA, which has 11 staff trained in museum-quality restoration, will focus on works of art and historical conservation, she said, and will drop an art storage component of its mission. Several sites now offer such services, which was not the case for most of the association’s 70-year history. The change will allow ICA to reduce its operations to 8,000 square feet of space leased to Pivot.

â€œThis will conserve our liquid resources,â€ said Reilly. The net proceeds from the sale of the building will help operations, she said, and serve as an endowment for the future of the ICA.

Hartnett and Reilly plan to close the deal in November. Neither would say how much Hartnett’s company will pay for the structure, which has a market value of $ 422,700 for property tax purposes.

Harness Cycle is seeking a loan from the US Small Business Administration for businesses that wish to own their own buildings, and it may apply for grants for some of its operations.

The ICA movement has its own special requirements. Rick Foran, who developed Pivot, said his team is studying how to add a freight elevator to the structure that is large enough to accommodate sculptures and other huge objects that the ICA sets out to restore.

Tom McNair, executive director of Ohio City Inc., the local development company serving the area, said he was confident Hartnett would treat the building appropriately and had the entrepreneurial passion to make his plans come true. .

For Hartnett and Loczi, the first step after obtaining title to the property is simple.

â€œThe first phase will be to start Harness Cycle and make it workâ€ physically, Loczi said, perhaps towards the end of the year.