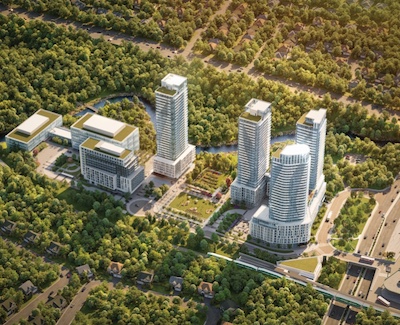 A rendering of The Residences at Central Park, a development by Amexon at 1200 Sheppard Ave. E. in Toronto. (Courtesy of Amexon)

A Sheppard Avenue property owned by Amexon Development Corp. of Toronto since 1995 is set to be transformed into a mixed-use, multi-tower community that will include more than 2,000 residential units and 320,000 square feet of office space.

Amexon’s redevelopment has been in the planning phase for 10 years.

It once housed three office buildings, but one has been demolished and the remaining two will receive renovation as part of the redevelopment of the underused site into a mixed-use community.

The project is a key part of Amexon’s growth strategy, which involves the acquisition of office buildings and land for development, where it makes financial sense for the company and its investors, and the development of high-rise mixed-use communities.

“We have expanded our residential component with an investment syndicate of more than 20 private investors,” Jason Shiff, who heads the company’s real estate division, told RENX. “We are looking for future growth in our portfolio which we want to explore for mixed-use development.”

“Amexon is one of the largest private developers of suburban office properties,” Shiff said. “It has various GTA development lands in its portfolio which when developed will have over 12,000 units.”

The 160-person company is about to launch sales of the first building at The Residences at Central Park. The property is on the northwest corner of Leslie Street and Sheppard Avenue East.

The expansive East Don Parkland, with its ravine network of trails that lead to downtown and the water’s edge of Lake Ontario, is also nearby.

The 31-story glass tower that will launch The Residences at Central Park will feature units with floor-to-ceiling glass walls, ranging from 439-square-foot one-bedroom spaces to 1,200-square-foot suites with three bedrooms and a den.

More than 60% of the units will have two bedrooms and each unit will have a spacious six-foot-deep balcony.

“You can fit a lot of furniture there and that was a big design draw for us,” said Shiff, executive sales manager for the project.

There will also be a business center, lobby lounge and library, co-working space with meeting rooms, guest suites, and full-service child care.

Residences in Central Park will be built with environmental sustainability and green features in mind, including: electric vehicle charging stations located throughout the underground parking lot for residents and visitors; green roofs; solar panels; self-service bicycle stations; and an on-site car-sharing service.

The design team for the project is comprised of CORE Architects, interior designer II By IV Design and landscape architect firm Cosburn Nauboris.

Sales will begin soon for the first tower at the presentation center at 1200 Sheppard Ave. E. and Shiff said that a large database of registrants had been compiled.

“We expect them to sell out quickly based on what we’ve seen in the market and the location.”

Construction of the first tower and the majority of amenities is expected to begin this summer with summer 2025 targeted for first occupancy.

Sales of subsequent towers will likely launch within six months. Starts for these buildings will be based on sales.

Shiff expects completion in late 2026 for the entire project.

Redevelopment of the Grand Hotel site and future projects

Amexon’s other major upcoming project is the redevelopment of the former Grand Hotel site at 225 Jarvis St. in downtown Toronto.

It will include a 68-story mixed-use building with six floors of hotel space with 210 suites at the base and condos above. Sales are expected to start towards the end of this year and construction is expected to begin in early 2023.

Amexon’s most recent notable development before The Residences at Central Park was The Residences of 488 University Avenue, a 55-story, 453-unit condo completed in 2019. It was a redevelopment of an 18-storey office building. floors at the corner of Dundas Street. West which kept the office part.

Amexon also completed two 27-story towers, which include South Beach Condos + Lofts, at Park Lawn Road and Lake Shore Boulevard in Etobicoke in 2012. It included over 600 residential units and a commercial component.